Bowhunting for brown bears can go from cool to risky in a matter of split seconds. 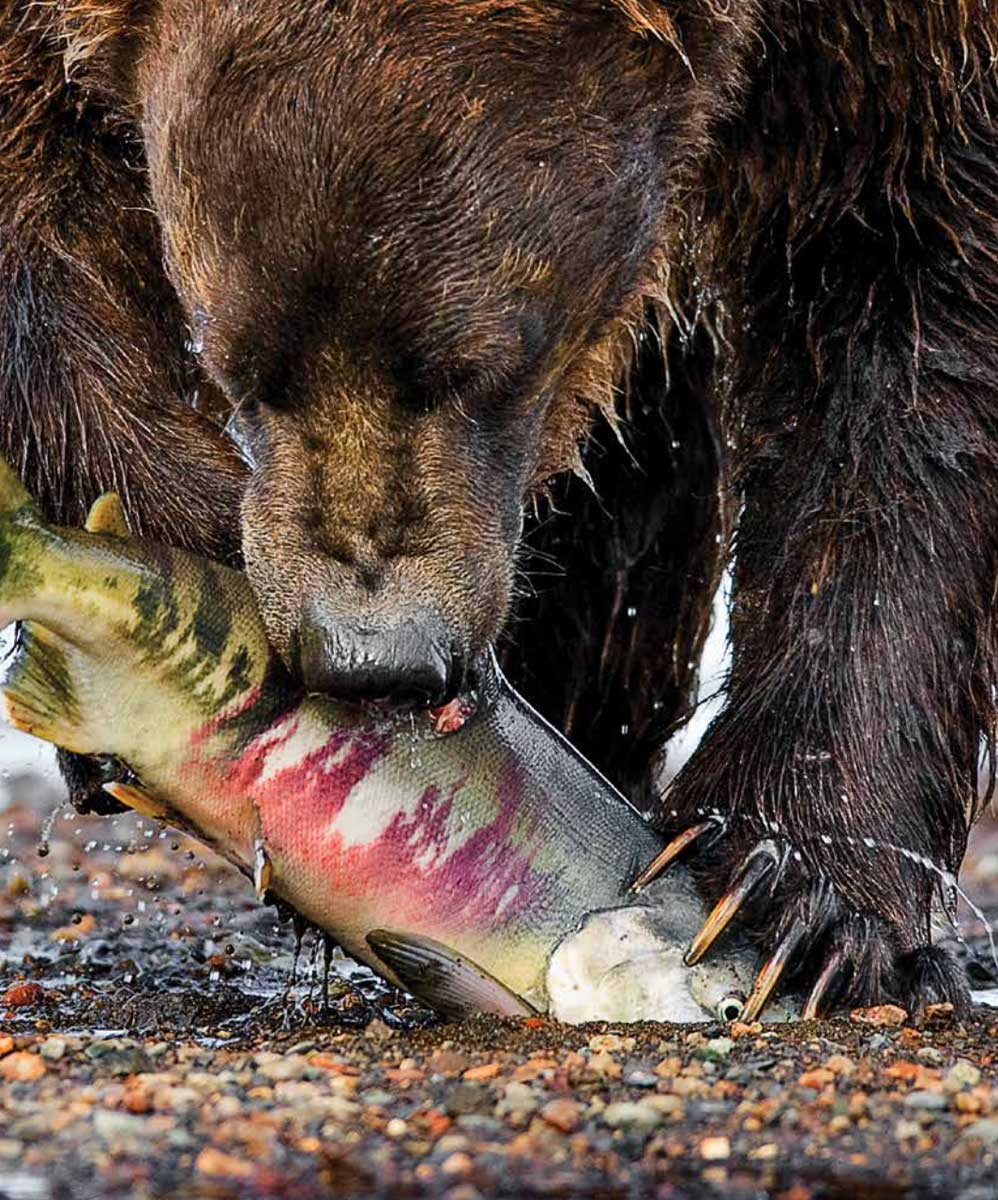 Bowhunting for Alaska brown bears is not for the faint-hearted.
photo by Tom Martineau/The Rain Spirit

Hunter Don Ferraro wanted to hunt brown bears with a recurve bow in Southeast Alaska. I intended to guide Don’s traditional-archery hunt near Haines in the remote drainage where a brown bear had infamously mauled an elderly acquaintance, Forest Young, in 1955. I told Don the gruesome story to underscore the risk of hunting brown bears with a bow on the ground.

He persisted and understood we’d need an opportunity within 20 yards. Two years prior, I had guided bowhunter Rex Dacus on a similar hunt. With his longbow, Rex drove a wooden arrow through the heart of a mature brownie at 15 yards.

En route to the cabin-based hunting area, I ran my powerful airboat far up a glacier-fed river. The forestlands we passed through displayed a mosaic of burgeoning autumn colors. We navigated a small, brushy stream where the fully loaded airboat powered across two dry channels.

As I arranged gear inside the cabin, Don saw three brown bears pass nearby. When we investigated their footprints, I said that all the tracks were about the same size and that the bears were not large enough to interest us. Referring to them as “the Rat Pack,” I mentioned that three adolescent brown bears running together or a sow and two adolescent cubs were trouble.

The next day, we hiked up the clear stream to an area heavy with bear sign that indicated a good spot for catching spawning coho or silver salmon. Don had his Black Widow recurve bow, and I carried my open-sighted Winchester Model 70 chambered in .458 magnum with 400-grain handloads.

As we walked exposed to view, a chocolate-colored, 8-foot male brown bear briskly strode our way. I dropped to a knee as Don hunkered behind and nocked an arrow.

The bear avoided eye contact and approached within archery range. It quickly caught a salmon, however, and walked directly away without presenting the broadside shot that Don required. When reaching the nearby brush line, it stopped, turned, and brazenly stared at us as if to say, “I know you’re there, but I’m big and tough, so I don’t care!”

Back at the cabin, Don said that seeing those three bears as soon as we arrived and then having that big boar walk right up to us this morning was more than he ever expected.

“It doesn’t matter that I have to leave early,” said the New Jersey contractor. “I hardly feel a need to shoot a bear now. I’ve already got my money’s worth.”

Too Close for Comfort
The next day, we returned to where the brownie had been fishing. We fashioned an ambush site near the end of a brushy point that projected into a shallow side channel. We cleared three shooting lanes, each extending from our concealed location to the water’s edge just a few feet away.

I positioned my chair a whisper behind and a bit offset from Don’s chair. By not sitting directly behind him, I had a better sight radius and he had more freedom should a charging bear force him backward. A re-positioned forked branch served as a prop that kept the rifle in reach of my right hand. Then I selected a slender stick, which I’d use as a pointer to direct his focus. We positioned our opened packs for convenient, quiet access and reviewed the touch signals we use when judging any bear that we may see. Don nocked an arrow and laid the bow across his lap. We settled in with our feet resting on mats of insulating ferns. The breeze blew in our favor.

An hour later, we heard fierce growling from upstream.

“It sounds like the Rat Pack’s fighting among themselves,” I said. “If they appear, they could be trouble. We want nothing to do with them.”

Just then, the quarreling bears exploded into view. Three abreast, they charged in our direction. Their heads held high, they all swept their eyes from side to side, in unison, as they bellowed ferociously.

“Should I try to take one?” said Don. “No. Too many of them for a bowhunter. Too small anyway. Let them run past. They might catch our scent and leave.”

Don shifted around while watching the oncoming bears. I slipped from my chair to kneel beside him, then gripped his shoulder and firmly but quietly, instructed, “Freeze.” Don moved his head again, so I increased my grip while stressing, “Don’t move a muscle. Your life may depend on it.”

The ominous bellowing and overlapping thuds of 12 pounding feet grew louder. I froze, one hand gripping Don’s shoulder, and the other on my rifle.

As the bears sped along the opposite streamside, 22 yards from our position, it appeared they would pass harmlessly. Then a single salmon in the shallows spooked. It frantically splashed away from the bears but directly to our side of the stream.

In pursuit of that lone fish, all three animals instantly angled off their courses to make synchronized long jumps that landed them within spitting distance of us. It happened so quickly that I had no opportunity to react.

We watched the uproar of three agitated bears and breathlessly hoped that one of them would catch the salmon they fought over and then all leave without spotting us.

Their teeth snapped violently amidst guttural grunts and insanely deep growls. Their large feet splashed the stream water high into the air and onto us. Abruptly, they all locked their eyes on us at the same time. One sow remained stationary. Another disappeared to our right, and the stout young boar circled to the left and then advanced with its jaws popping.

I jumped in front of Don, yelled “Stay seated” and took two steps to his left to confront the oncoming boar. My mind raced for a solution to three attacking bears, short of killing them. The boar stopped in belly-deep water to stare at me from 20 feet. I held the rifle at my hip, trained on the boar, my finger on the trigger. I returned its gaze while keeping the stationary sow in the corner of my eye, mindful that the third bear remained somewhere behind us.

I intended to try driving them away, but the boar broke eye contact to glance behind me, indicating that it saw the third bear in motion. Then the boar quickly heaved through the water to place both front feet on the edge of the three-foot-high streambank where I stood. As the bear scaled the embankment, it rose before me, but I couldn’t step back into Don’s seated position. I pulled the rifle from the reach of its jaws and fired into its chest. The concussion rebounded off the bear and smacked my face.

Sparing the sow that remained standing to my right, I reloaded while turning and bounded past Don to position myself between him and the other sow, now advancing from behind.

She held her head low while stalking along the archery lane leading to Don’s right. When confronted, she paused to stare into my eyes. I held her gaze while quietly pleading, “Don’t do it. Don’t do it.” Then she raised her head and closed so quickly that the muzzle of my rifle projected under her snout when I sprang backward while firing again from my hip. I saw the shockwave quake entirely through the bear when it hit the ground just before I did.

The final bear remained standing while casting glances to where the others fell when the big rifle twice roared. Its demeanor now projected confusion and uncertainty, implying that it no longer presented a significant threat. I charged at it, and it began running away. But as soon as I stopped, it returned. Then I ran toward it while shouting wildly. The bear stood its ground for a long moment and then ran off as I pursued until it disappeared into the forest.

Still seated in his chair, Don leaned out and touched the nose of the dead boar with an arrow in his extended left hand, wholly composed.

“I didn’t think this hunt could get more exciting than yesterday,” he said. Aware that adrenalin still coursed through me, I concluded that he must have nerves of steel.

After estimating the age of the two dead bears and then thinking through our encounter, I figured that they were a family comprised of a mature but young sow and two adolescents. The younger bears had likely been the sow’s first cubs that could have been on their own by now. They were already agitated and pumped with adrenalin from fighting among themselves. Fresh wounds on their faces revealed their antagonism toward each other, which would typically have caused them to go their separate ways. They must have found strength running the spawning beds together while bellowing to frighten other bears and claim the salmon for themselves. When they spotted us, they instinctively followed the same aggressive routine that had served them well. That remaining bear was only searching for the others when she attempted to return.

The adult sow and adolescent boar that I shot were equal in size. We skinned both animals and then forfeited their hides and skulls to the State of Alaska, as required in such circumstances. We also detailed the incident in an official Defense of Life Document submitted to the Department of Public Safety.

Don Ferraro had performed bravely and flawlessly. By remaining seated, without a firearm, he demonstrated trust in my judgment and ability. Although Don left without killing a bear, we all know that our most memorable hunting adventures are the stories best shared with others.