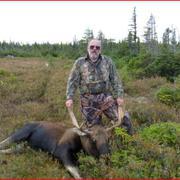 The province of Newfoundland has an estimated population of over 120,000 Eastern Canadian Moose, the most densely populated area in North America. Areas 39 & 39A have exceptional moose population density due to it's remote wilderness location,accessible with float plane only. The average antler size in our area is 36 to 40" and we take some every year in the 40 to 50 inch range. Overall success since 1993 has been 95% on Bull Moose. Long Range Mountain has two locations on the Eastern Side of the Norther Peninsula, on top of the Mountain range, in rolling hill country. The area has ideal Moose Terrain with small bogs and streams, small lakes, timbered valleys and barren peaks. The barren peaks can be utilized to glass and call the area for Moose.
The black bear can only be combined with a moose or caribou hunt. We do not offer this hunt as a seperate hunt on it's own. The bears have lots of natural feed here in area 39 which allows them to grow to a very large size.

ALL PACKAGES INCLUDE
Guides, all Meals, License fees, Accommodation at camp, Float plane to & from camp from float plane base.

Message sent to Long Range Mountain Outfitters.
Since you already have an account with us, SIGN IN to get more from Guidefitter.