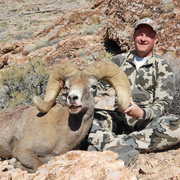 There is nothing like hunting Elk in the rut! NV archery hunts start in mid August and run through the middle of September. These hunts are truly awesome to say the least. Nevada rifle hunts take place in November with an early hunt and a late hunt.
Trophy Mule Deer are probably the most sought after big game trophy right now. Monster mule deer are tough to find and even tougher to harvest. We hunt the best trophy units. These units will typically produce bucks in the 180" range, but they also have the ability to produce giant bucks.
We have world class hunts for Mountain Lions! If you have ever wanted the opportunity to harvest a lion, now is the time to make it happen. Nevada has some BIG cats and with over 25 years of hunting them, we are very confident that we can make it happen for you.
Antelope hunts in our areas are really low pressure, fun hunts. We have plenty of bucks and most units can produce bucks in the 80" range.

Hunt prices do not include hunting licenses or permit fees, processing and shipping of meat, taxidermy services or gratuities. A deposit of 50% is required to book your hunt. The balance is due 30 days prior to your hunt. Non hunting guests are $150 per day.

Message sent to White River Guide Service.
Since you already have an account with us, SIGN IN to get more from Guidefitter.