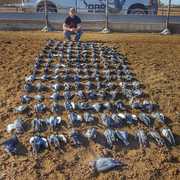 Hunting locations can vary, but are typically found in fields, dairies, feed lots and granary locations. When hunting in dairies or feed lots, group will be set up in the corrals with the cows or just outside of the corrals. Group will be sitting on bucket seats or chairs (which will be provided) when hunting in or outside of the corrals. For fields and granaries group will be using layout blinds (which will be provided) the majority of the time. Keep in mind this is not pass shooting like is found in Argentina, instead the pigeons will be decoying fifteen yards out from group right over the decoy spread. Here in the state of Idaho there are no seasons or limits associated with pigeons. The pigeons start flying shortly after sunrise and will be steady for two to three hours. After this point it will be up to the customer if they would like to stay set up and decoy the occasional groups of pigeons between the morning and afternoon hunt, or take a break at a designated resting spot.

Each day includes Full morning and afternoon hunt.
Hunts will range between 8-10 hours per day
Gun rental available to shooters for $20/person per day.
We only guide during the best times of the year

What's Provided
Transportation to and from hotel and hunt location
Drinks, snacks, and lunch
Chairs and blinds
20 Dozen Soar No More Decoys

Message sent to Pure Pigeon Outfitters.
Since you already have an account with us, SIGN IN to get more from Guidefitter.