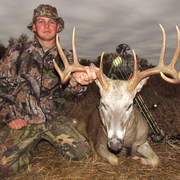 Montana has a Fall archery season for black bears!. Our river bottom leases are full of choke cherries during early Fall which really attracts and holds a lot of black bears and have been increasing in numbers over the years. Some having a color phase coat such as cinnamon or blond. The best period to bowhunt them on our private leases is during September through the first week in October. A lot of our whitetail bowhunters in September through early October are seeing bears from their tree stands, and a lot of them within easy bow range! Most of the time, they are passing through as they are nomadic in their travels. However, they are usually on our leases consistently during archery season after choke cherries and provide an excellent Montana trophy if an opportunity presents itself! Hunters booking a hunt for whitetail, mule deer, elk, or antelope can purchase a bear tag as well and bowhunt them from tree stands or ground blinds while pursuing other game animals. A perfect combo hunt for whitetail bowhunters coming during September through the first week in October is adding a archery black bear hunt for a truly unique Montana bowhunting experience!

Message sent to Montana Whitetails.
Since you already have an account with us, SIGN IN to get more from Guidefitter.