Talk to any diehard deer hunter, and you'll hear stories of giant bucks with one common theme: most of them got away. Why? Because they're smart. 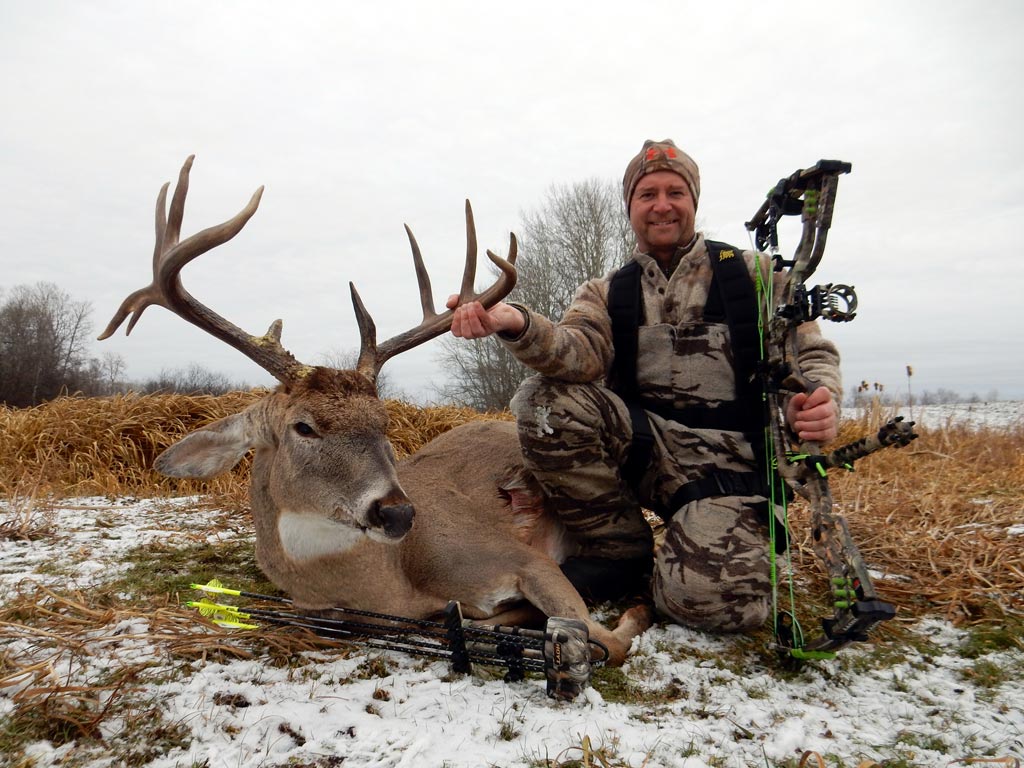 Whether you’re hunting whitetails in Texas, Pennsylvania, Iowa, Washington, Ontario, or Alberta, this most prolific North American deer species can often be patterned. Invest time monitoring movement – especially in the summer and fall – and you will soon observe trends related to where, when, and how they travel. Photo Credit: Kevin Wilson

Does and younger bucks can be relatively easy to pattern, but more often than not, those truly exceptional big-antlered deer seem to avoid detection with ninja-like abilities. Talk to any diehard deer hunter, and you’ll hear stories of giant bucks with one common theme: most of them got away. Why? Because they’re smart. With few exceptions, patterning bigger bucks requires dedication, interpretation, planning, and a measure of luck.

So how do we find and pattern big whitetails? The answer depends on genetics, time of year, and the food sources and cover in the area you plan to hunt. And, of course, your level of commitment. Your first priority is finding an area holding high population densities with a healthy representation of all age classes. This is most indicative of genetic strength and consistent winter survival. 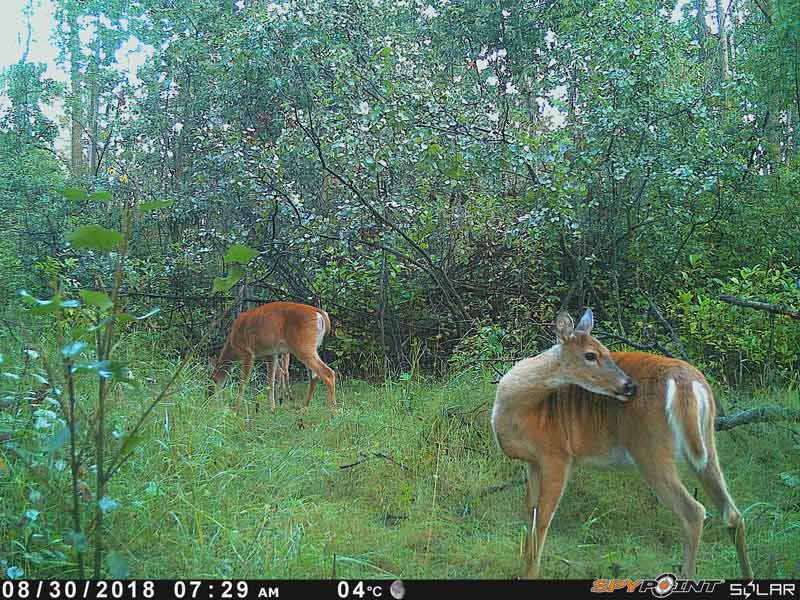 Does and young bucks are easily patterned as they routinely use the same trails to and from bedding and feeding areas. Photo Credit: Kevin Wilson

Whitetails, more so than mule deer, are creatures of habit. They generally key in on food sources and bed in the best-available sanctuary cover. They have innate survival instincts and know how to elude people. With any pressure at all, they usually become nocturnal. In fact, even left undisturbed, mature whitetail bucks can be almost ghostlike.

While does and younger bucks follow routines, the biggest deer are nomadic by nature. They’re constantly on the move and much more difficult to pin down. Where cover is abundant – especially in large timber blocks – they typically shift within their territory, often daily or at least every two to four days. In a similar manner, big whitetails take up residence in areas where they feel safe and undisturbed. The smaller the area, the more likely it is to pattern them. For this very reason, some of the biggest whitetails ever taken were harvested in unsuspecting, relatively small home-range locations.

Placing cameras on heavily used trails from July on can give you a good idea of when the deer are using those trails. Photo Credit: Kevin Wilson

My own off-season scouting begins with two steps: shed antler hunting from January through April, and monitoring movement with trail cameras. Locate the highest concentration of feeding activity and the trails deer travel between bedding and feeding – not to mention the bedding area itself – and you’ve discovered a hotspot for shed hunting. Pick up a decent set of shed antlers and you’re on your way to patterning a big buck. At the very least you’ll have learned where he’s wintering. But just because that big buck spent the most frigid months there doesn’t mean he lives there the rest of the year.

With the arrival of spring and summer, deer disperse back into their relaxed summer routines. Protected by lush foliage, they seemingly vanish, only allowing us brief glimpses as they step into feeding fields, and move across cutlines or right of ways. Fortunately, we can monitor movement year-round with the aid of trail cameras. Even still, I’ve run plenty of cameras over the years, and rare is the camera that routinely captures a big buck doing the same thing over and over again. Big deer rarely allow themselves to be caught on camera repeatedly; their ability to detect and avoid trail cameras is uncanny. It’s much easier to pattern does and young bucks.

A bigger whitetail is sensitive to pressure. Roust him once and it may take several days for him to settle back into his home turf. A big buck simply doesn’t like to be disturbed. For this reason, checking trail cameras should involve care and attention to detail. Do so only during midday hours when deer are most likely bedded, remain as scent-free as possible, and move in and out of the woods quickly and quietly. Reject the urge to check your cameras frequently. Remember: Each time you check them, you lay down human scent and potentially alert the deer to your presence. Most often I’ll leave my cameras for at least a week or more between visits. If my trail-cam images show a patterned buck, I hunt him immediately. 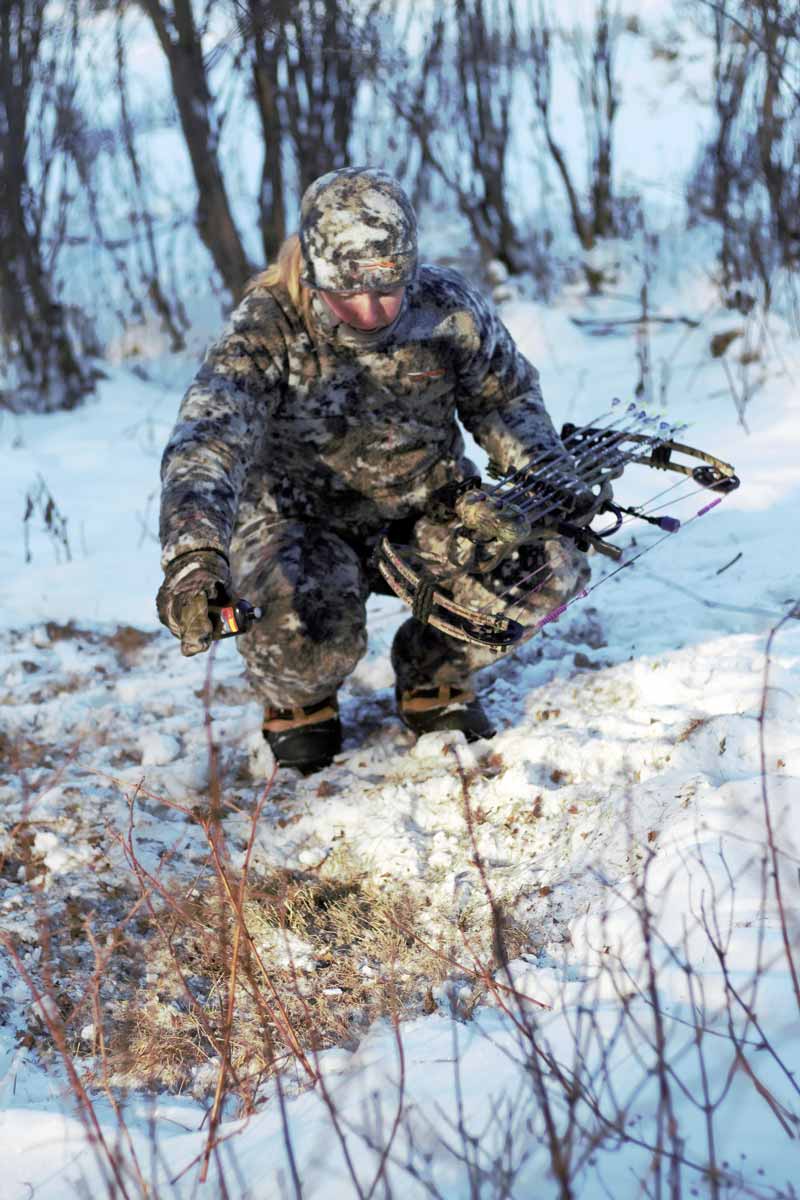 As we move into the pre- and peak rut period, focusing on areas with heavy scrape activity will help us pattern whitetails. Photo Credit: Kevin Wilson

For many early-season hunters, patterning efforts begin in early August as velvet antlers reach their growth potential and then into the first week of September before bucks shed their velvet. By early September, whitetail bucks begin their earliest pre-rut rituals of traveling to lay down territorial boundary rubs and scrapes. Cereal crops are still standing and they can venture out into those open areas well-concealed with little more than their antlers exposed. During this brief window of opportunity, early season hunters can pattern whitetails by watching early-morning and late-evening movement to and from feeding fields and bedding areas. Canola fields, alfalfa fields and especially pea fields near protective cover can be dynamite places to watch.

As a rule, most big whitetail bucks regularly change their travel patterns, rarely entering and exiting the woods on exactly the same trail. When they do and you’re able to pattern a big buck, it can be a race against time to get in and hunt him before he shifts.

Remember: As soon as velvet antlers turn to hard antlers, big bucks shift their movement patterns. In many instances, they instantly become nocturnal. Add to this the looming colder weather and falling leaves, and the world of the whitetail deer can change overnight. 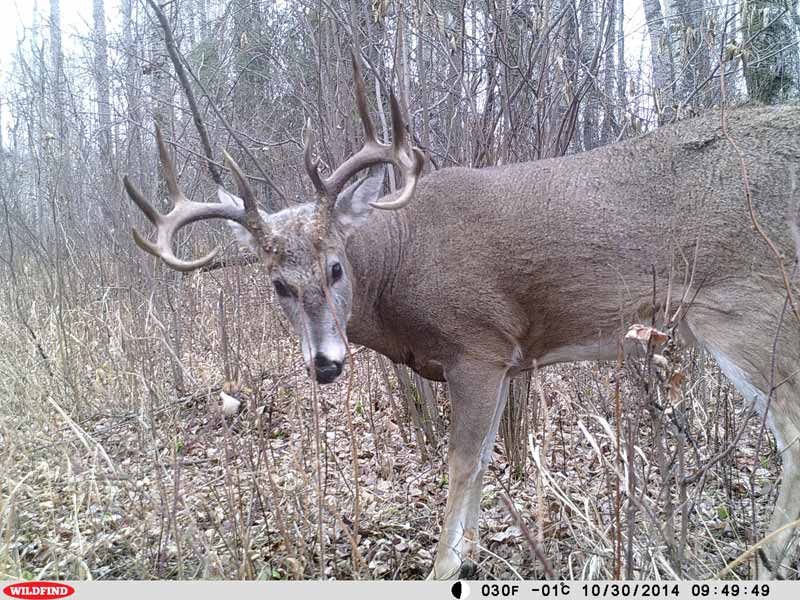 Bucks and does visit primary scrapes with increased frequency during the peak estrus, the 48- to 72-hour period in which the majority of does go into heat. Photo Credit: Kevin Wilson

Then there’s the rut. In so many ways, the doe estrus is a game changer for patterning big deer. Find the does and you’ll eventually find the bucks. On one hand, big bucks are on the move covering their territory. Monitoring does for breeding readiness, they travel their area servicing boundary scrapes in the pre-rut then localize this behavior to primary scrapes during the peak first- and second-estrus periods. With this in mind, savvy whitetail hunters can, to some extent, pattern a big deer that they know lives in the area.

During the peak estrus, a dominant buck will generally visit his primary scrapes one or more times during every 24-hour period. The key is catching him there during daylight hours. At the other extreme, I’ve patterned giant whitetails to the extent that I was seeing their tracks routinely at my mock scrapes, but they just weren’t showing up when I was sitting in my stand during daylight hours.

On several occasions, I’ve been able to capture big bucks on camera during the pre-rut in September and October. The more challenging time is the pre-rut from mid-October to around the end of the first week in November when bucks are covering ground checking for the first hint of breeding readiness. If big bucks are localized, they can come in on a string, but if they’re doing their walkabout, you may not lay eyes on them for days, even weeks, at a time. 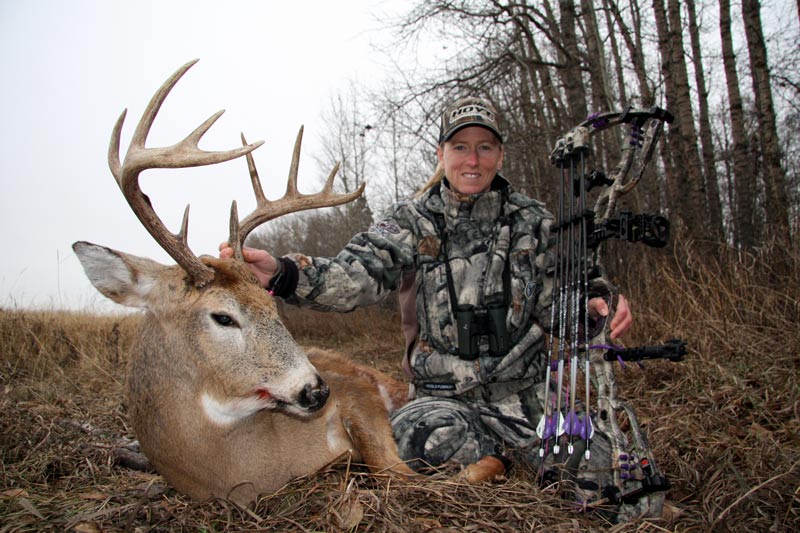 By patterning and focusing on doe movement, both the author and his wife were able to intercept this buck – and the featured buck – on consecutive days during a late-November hunt. Photo Credit: Kevin Wilson

In my experience, several big bucks have become routine visitors to primary scrapes around the last week in October and into November’s first and second weeks. I was able to entice them to stay close by servicing those scrapes with doe estrus and dominant buck scent. Rattling and calling, I brought them in on a string. Patterned to the point of knowing they’re nearby, lingering dominant bucks have eagerly challenged the clinking of antlers and wanton moans of doe bleats during this peak period.

In the end, whether you’re focusing on the first or second estrus, patterning whitetail bucks is about locating and focusing your efforts on the does. Pattern the does, and the bucks will eventually show up.