If killing a moose, woodland caribou, or black bear is on your bucket list, look no further than Double M Outfitters in Newfoundland and Labrador, Canada. To learn more about what Double M offers, we talked with owner Stephen Mcdonnell.

Double M Outfitters have the animals that you are looking for and they know how to help you put them on the ground. Whether you choose to use a bow or a rifle, they have you covered. What’s more, their success rate on baited black bear hunts and moose hunts has been 100%. Tags are issued by the outfitter, so there’s no apply and wait period or putting in annually to build preference points. This also gives hunters the option to double up on tags and take more than one animal. Prices are reasonable with moose hunts going for $4,250 and black bear hunts at $3,200. Double M also offers bear tags as an add on for your Canada moose hunt.

While Double M Outfitters is just going into their fourth hunting season in business, don’t mistake them for amateurs. Mcdonnell said, “I started guiding back in 2000 at that same camp we just bought, so we’ve been back and forth in there for a long time.” Stephen and the other guides help 40 hunters a year accomplish their goals of harvesting trophy game.

Aside from the expert guides and trophy animals, the sheer wildness of Double M’s hunting area makes for an interesting adventure. Mcdonnell said the closest competition is 20 miles away in any direction. He and his guides use Argo all-terrain vehicles to help get their clients into spots where the biggest animals live and to help with retrieving the meat and antlers after a successful hunt in the Highlands. Mcdonnell said, “It’s a lot of river valleys we’re hunting, mountains, a lot of open swamp marshy areas. Using Argos gets us into areas where most people can’t get.”

Home Away from Home

All Double M Outfitters’ moose, caribou and bear hunts include lodging and meals. Mcdonnell said, “We have a full time cook there cooking all homemade meals.” Sleeping accommodations are in a lodge or in one of four private cabins. The lodge is recently renovated, with a full bathroom, TV and wood-fired heating. According to Mcdonnell, “If [our hunters] come for trophy hunts, we have some wall tents we’ll take further into the inside of our country and we’ll camp in there.”

Mcdonnell said, “A good outfitter, in my opinion, takes care of his clients. If they come up for a certain kind of hunt, you try to satisfy all their needs on whatever they’re looking for. If they come up for a trophy hunt, you do the best you can to take them to the areas where the trophy animals are. You do whatever you can for them to enjoy themselves while they’re there.” Taking good care of their clients keeps the guides at Double M busy throughout the hunting season. Mcdonnell said, “Some days are dark until well after dark again. Typically, you get up a couple hours before daylight and get everybody straightened away. Sometimes, after dark, we’ll be taking meat out to the butcher or picking up parts for generators or Argos; or, if the hunters want something we’ll send somebody out to get it. It’s a non-stop shop once the season opens.”

Mcdonnell said, “We had a father/son hunt last year which I got to be a part of. It was the son’s first hunt. We took him down to a little valley there and it just worked out perfect. We called to a moose and he came right in. They were all excited and I guess I got a little bit excited too. It’s good to experience (the hunt) with other people.”

Another recent client came with a group of six people. Before the hunt, the group made a bet on who would shoot the biggest moose. After passing on a nice moose on opening day, the action slowed down a little. Mcdonnell said, “By Friday, he was getting pretty desperate.” After relocating the moose from the beginning of the hunt, they were able to take him down, but not before firing a few errant rounds. Mcdonnell said, “I guess he got a little excited, but we managed to get the moose after a few shots.”

A few notes if you're ready for moose (or bear or caribou) hunting in Canada with Double M...

If this sounds like the kind of Canadian hunting adventure you’ve always dreamed of, contact Double M Outfitters. They have just ONE remaining woodland Caribou hunt for the 2017 season. 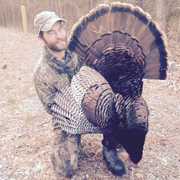