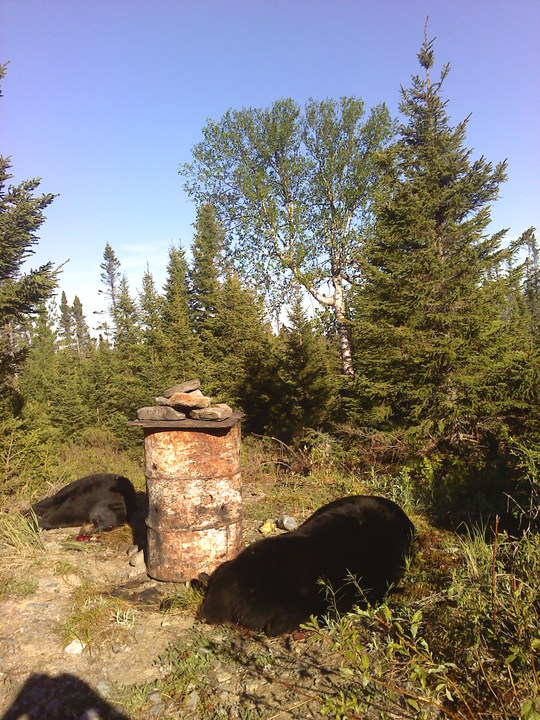 At 6:00 pm it happened suddenly and without any sound, a large bear appeared to the right of the barrel and much to my surprise a second smaller one was tagging along behind! I knew from its size that the smaller one was not a cub as it looked to be about 150-200 pounds. As both bears neared the barrel the bigger bear suddenly turned around faced the smaller one which promptly turned and disappeared from my sight. The large bear then continued on its beaten trail towards the barrel and stepping up into the opening where it was located, it presenting a perfect broadside view. I immediately placed my CZ375 H &H on my Vanguard Pro T68 tripod, placed the crosshairs of my Zeiss scope behind his shoulder and fired. The bear went down at once but I could still see movement so I fired another shot at its head for good measure. I was told to keep shooting if the bear keeps moving but I didn't think the second shot was necessary. I was elated! As much as I wanted to go down and see my bear I stayed in my stand as I was told, to wait for Craig. He wasn't far away and I knew he could hear my shots and would soon arrive on scene. I was even more surprised when less than five minutes later, the other bear appeared at the barrel, from the rear on its left side and facing in my direction. It was sniffing the ground completely unalarmed so I placed the crosshairs between its eyes and fired. It went down in a split second and didn't move. I had just killed my tenth bear and I was thrilled with excitement! I had waited for so long for this moment! Within ten minutes I heard the approaching ATV and Craig arrived "what's all the shooting about" he asked. "Look by the barrel and you'll see" I replied. " jesus that's two bears you got killed, come on lets go down and take a look" "Do you think it's a sow and a older cub" I asked. "I don't know but I hope not" he replied. We approached the two bears and Craig reached down on the first bear I had shot and picking up a hind leg looked and said "this is a male here thank God". He checked the other which turned out to be a female. We spent the next hour taking pictures and then Craig backed the quad and trailer in and we loaded both bears into the trailer on top of spruce branches to prevent any rubbing of fur against the cart on the way back to camp. 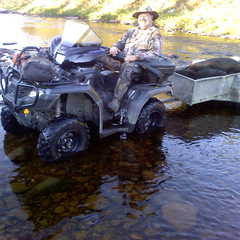