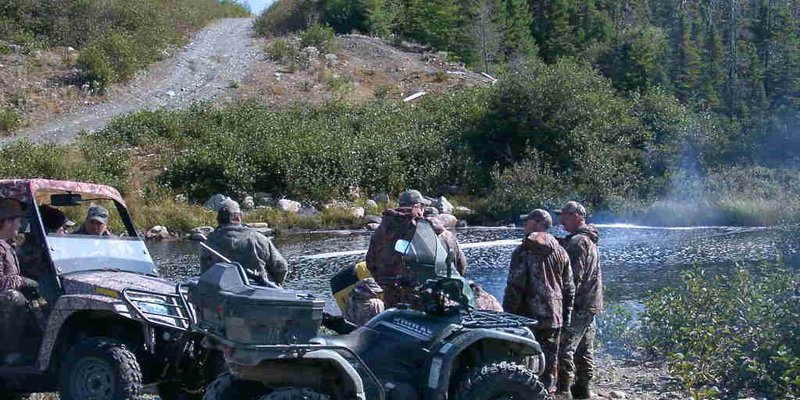 Once finished I said to my sport come on lets break camp. I could tell by the look in his eyes he didn't need any more urging and to get some fresh air blowing in his face was just what the doctor ordered. The morning was cool and a misty fog blanketed most of the countryside. Were heading inside I told him so we have a ways to go and I need to make up some time. It was still dusk and as I cruised in the old logging road, I could feel Greg slumping down in the seat behind me, the bolt from his gun that he had cradled in his lap kept pushing in my back causing me to inch forward on the seat with every bounce. I glanced around to see his head tilted forward on his chest. I jerked my elbow in his direction hitting him in the ribs, "wake up" I said "it's no good to only see them in your dreams". He gave a brief smile but I knew what he was thinking, ya right!! I never had many miles behind us before I glanced back again and sure enough he was resting again. Any moose on his side of the road were safe enough I figured, I'll fix him I thought to myself.


We came to place where several times within the last little while we had seen a cow and "other" tracks. Suddenly I piled on the brakes causing Greg to come out of his seat and slam forward into my back. I quickly turned to Greg and said "get off and get the magazine in your gun, there's a f'in big bull right there on the cutover". He nearly fell off the bike trying to dismount while reaching in his coat for the magazine. "Where the heck is it" he mumbled going from pocket to pocket. Suddenly I heard the clink of the mag being slammed into the gun and the bolt being slapped to and fro loading the gun. "Where is he?" "Right there" I said pointing my finger at the cutover. "Where to" he said. "Right there" I said again pointing my finger "are you blind or what" "I can't see the goddam thing" he said. I went behind him and lifting him clear off his feet I planked him down again saying "there he is right there in front of you". He squinted, wiped his eyes ran his fingers through his hair but again, this time pleading with me said "Craig I can't see him". No I said and I can't either I'm just joking. 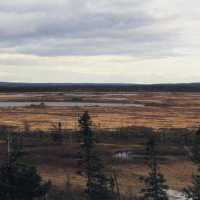 Anybody For An Electronic Moose Caller!