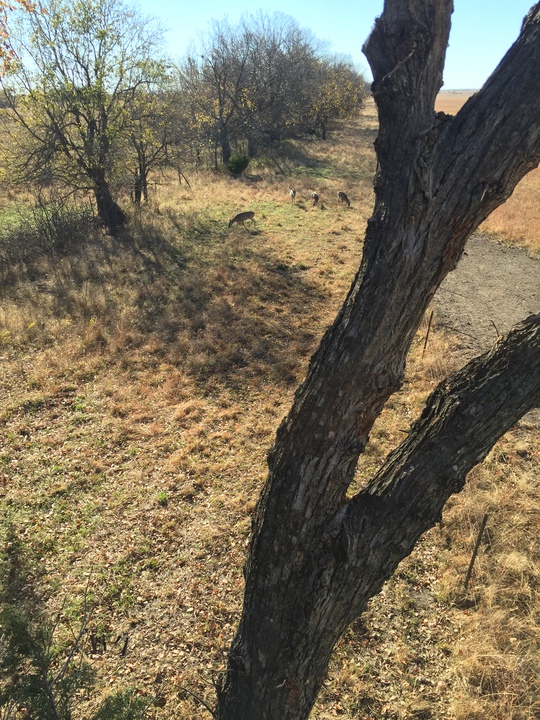 Day 2. It's November 9th and the warm temps are keeping deer movement down. The deer we saw moved at daylight and dark. Everyone in camp experienced the same kinda of movement today.The weather change I mentioned earlier is suppose to happen overnight. Tomorrow could be the day.


Day 3. The temps dropped to 28 degrees. I couldn't wait to get back in the stand. November 10th is gonna be the day I shoot the giant I have waited my entire life for! Ok, so it didn't happen. But I did see three bucks over 150. They chased does out in the broom grass until 10:30.It was an exciting morning to say the least. Part of my goal going to Kansas was to see big bucks chasing like that.Nothing came close but one thing is now proven, all the trail cam pics Jacob showed us are real, big bucks do exist on his farms!
After a quick lunch, Wade & I headed to a ground blind for our evening sit. The wind had changed direction and those cool temps from the morning are long gone. It was a long ,comical , smelly sit. One things for sure,Wade and bake beans don't go well together! Finally after legal shooting time ended,my Zeiss binos revealed 4 does moving up through the drawl.We waited for them to pass by , then we headed out.
Arriving back at camp, we learned Steve had shot a buck right before dark. Unsure about where the arrow hit,Jacob decided to wait until morning to go look for him.
That evening we ate another great supper. Afterwards we were all looking at the mounts hanging in the living room, when Jim commented about the crappy workmanship of the mounts. Jacob laughed a little , unbeknownst to Jim, the taxidermist who did the crappy work was sitting at the kitchen table getting more irritated by the second.He exploded out of kitchen swinging a right hook toward Jim but Jim ducked and his swing caught Steve in the shoulder.Steve then shattered Benners nose. The cameramen jumped up to start filming the brawl. Jacob got himself in the middle of it trying to break the whole thing up,he to took one to the face...Ok so none of that ever happened but the red in Benners face said it might! The real story is we all knew Benner was the taxidermist and we're playing A lil joke on him because one of the mounts had cracked around the mouth ,due to being hauled around to shows by Jacob for advertising . Benner does outstanding work and a few minutes later the joke was over but we all had a few good laughs.
Now , back to the hunt.
Day 4 found us in a different set. We saw a couple small bucks as well as a few does. The best part of the sit was getting to see the bobcat that came slipping by. Even in Kansas you can have slow, Uneventful days. But , wait there is some good news, they found Steves buck! 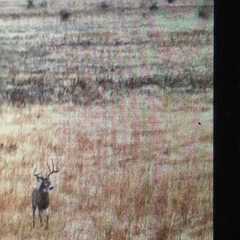