When preparing a European mount for yourself or clients, consider dermestid beetles as an alternative to boiling. 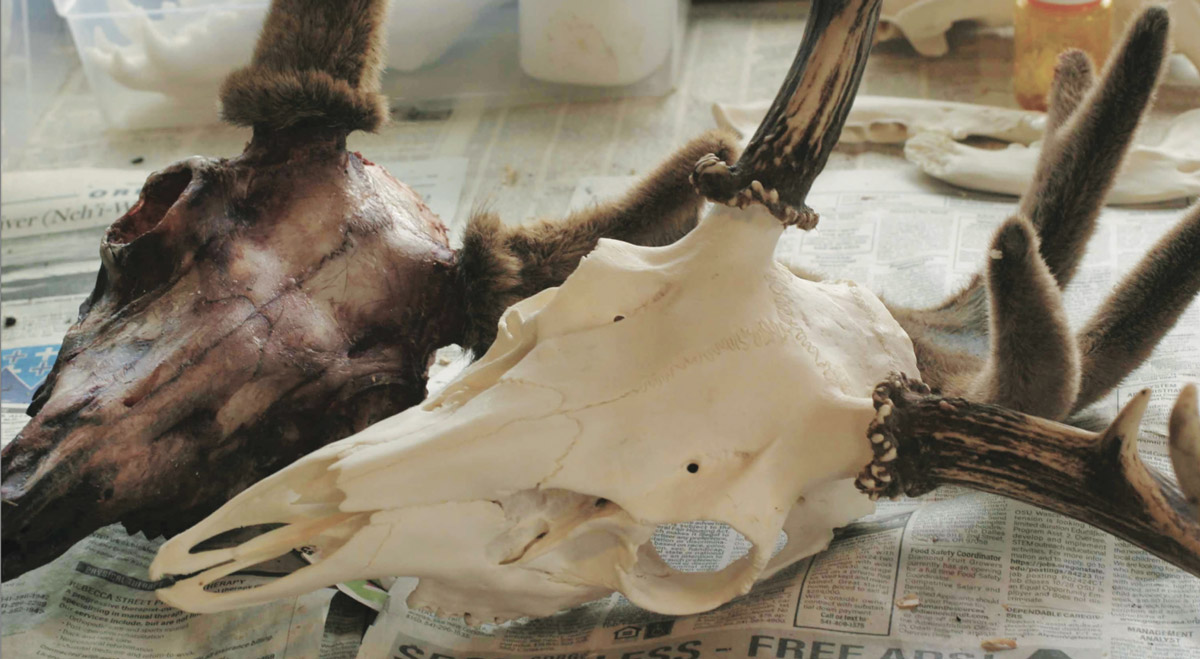 The deer skull on the left has had the fur and some flesh removed but has not yet been cleaned by dermestid beetles. The other skull has been cleaned by the insects, bleached, and is ready for mounting.

Whether your prized hunting trophy is a whitetail, wapiti, or huge Alaskan grizzly, a European mount can highlight all the intricacies and nuances of the specimen’s skull—down to the details in the smallest bone chambers and cavities. And no matter how impressively your prized trophy looms over a room, it’s a minute, half-inch critter that can ultimately make that wall mount shine.

Ken Hansen, who is owner and operator of Kodiak Bones and Bugs Taxidermy, employs dermestid beetles when he’s preparing a European mount.

“Little dermestid beetles are nature’s vacuum cleaners when it comes to removing dead and decaying flesh.” He regards the dermestid beetle (a species native to North America) as “... .basically the white rat of the skull-cleaning world.”

There are many genera and species of dermestid beetles, but not all of them feed on decaying flesh. Carpet beetles, for example, are a variety of dermestid beetle that feeds on natural fibers, such as hair, wool, and feathers. Dermestes maculatus is a carrion beetle, and its reputation is such that museums employ them to help prepare skeletal displays.

There are several ways to accomplish this.

Make sure the client has a conversation with a senior member of your guide team right after the booking. Your trusted employee can answer any questions right off the bat. They should be the contact for other questions that will inevitably pop up.

Prepping a Euro Mount
Achieving a display-worthy European mount begins with removing the flesh from the skull and then includes one of two basic tissue-removal processes. Typically, animal bones for a skull mount are cleaned either by maceration (soaking and boiling) or by utilizing flesh-eating bugs (dermestid beetles, larvae and adults to be exact). Each process eventually dissolves or consumes all the meat and other tissues throughout the entire bone structure—from expansive skull caps to internal, deep-down, minute skull cavities.

Both methods are effective. The beetles, however, do a more thorough job, and there are other advantages too.

The process of using the beetles does not require continued monitoring. And though they take longer than boiling, they complete their work within 24 hours or so longer (depending upon the size of the skull). Boiling often requires monitoring and adjusting temperatures throughout the process. The odors generated by the insects are much milder than the aroma of boiling animal flesh. Best of all, the insects will pick a skull clean while preserving the delicate structures. Such connections can loosen and fall away during the boiling process.

Physically, skulls can shrink one to two percent when boiled, but they don’t shrink at all with the bugs. With the insects, there’s also no build-up of grave wax, also known as mortuary wax or death wax but officially known as adipocere, which is often rendered due to the hydrolysis of fat in tissue during the boiling process. Beetles neither loosen sutures nor do they crack teeth as can happen during boiling. Bones cleaned by the beetles retain their natural color, whereas boiled bones often take on a yellow cast.

After all the fur and flesh have been removed and the beetles have feasted, the skull is ready to be degreased.

“Dawn soap is the gold standard for degreasing,” says Hansen. Degreasing is simply a soaking process; the soapy water needs to be changed repeatedly until it remains clear.

The final step before the skull is ready for mounting is whitening. The skulls should be soaked in a three-percent solution bath of hydrogen peroxide. Hanson says that a stronger, more effective solution, 40-volume peroxide cream to be precise that you apply with a paintbrush, can usually be found at hair salons. After a thorough soaking or brushing (about 24 hours or longer if visually necessary), the skulls can be placed in the sun where UV radiation will further whiten the bones. Hansen is quick to warn that you should never use bleach to whiten a mount as it will ruin the bone structure. 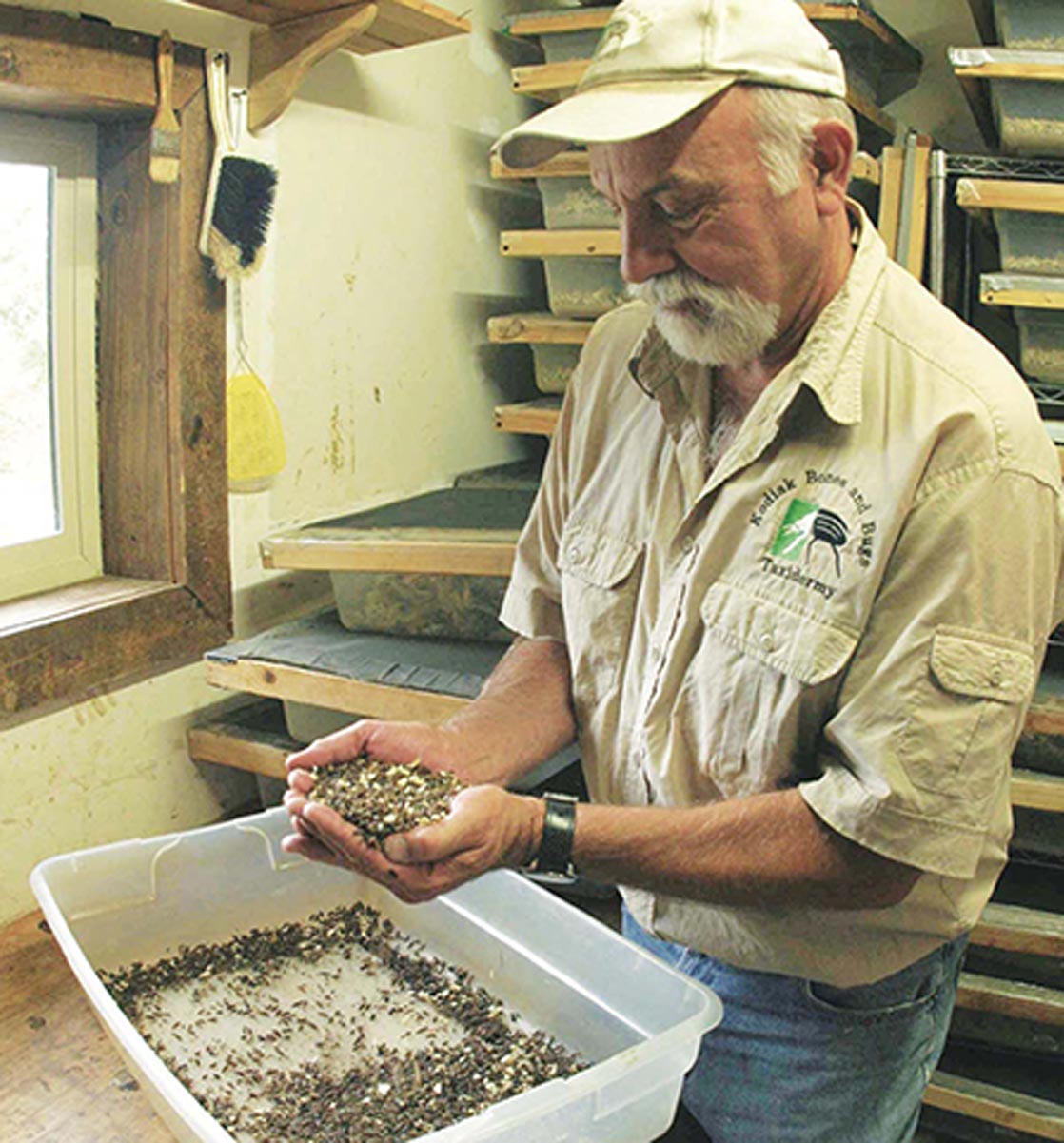 Not a Danger to Society
Skulls selected for European-mount displays can either be sent to a taxidermist who specializes in cleaning with dermestid beetles or you can do it yourself by developing your own dermestid beetle colony by ordering a starter colony from a reputable taxidermist or beetle-growing operation. Expect to ride herd on at least 1,000 bugs, at a bare minimum, if you plan to clean deer or other smaller-sized skulls. A large bruin or other big critters could require at least five times as many beetles to clean the skull properly and completely. Plan on working your way up to a larger colony by feeding it gradually as it grows in population before you tackle bigger cleaning projects.

Hansen reassures potential DIY bug-colony keepers that once the insects’ food source is depleted, the bugs simply die and dry up.

“Some people have the misconception that if a colony of dermestid beetles gets loose, the little insects will devour human flesh and become like the plot for a horror movie,” says Hansen. “They consume only dead or decaying flesh. They will not bite or eat living flesh—including humans.”

Creating a European mount for your wall of trophies is the final, long-lasting step for showcasing a successful, memorable hunt. Dermestid beetles can be a vital part of that process.

How to Develop and Maintain Dermestid Beetle Colony
While sending off a skull to be professionally cleaned by a taxidermist is one option, skulls and other bones can be cleaned and processed at home with your own colony of beetles. Here are some key components and considerations for developing and maintaining a dermestid beetle colony.

Dermestid beetles feed on decaying flesh and are often used to prepare animal skulls for European mounts. This series of photographs shows the progress a colony of the insects makes on a skull over a short period of time.

How do I start a colony?
Some taxidermy operations sell dermestid beetles as starter colonies that can be used to develop a colony of your own. The larva and beetles can be fed a variety of fresh meat as the colony reproduces and grows. It’s best to start with smaller skulls and build the colony's population so that it will completely and adequately clean larger skulls (deer, bear, elk, etc.) in a reasonable amount of time.

How many beetles will I need?
Three hundred beetles are enough to clean skulls up to the size of a deer, but a population of 1,000 beetles is considered to be average for starting out and can clean such a skull in about 24 hours—longer for larger skulls. If you’re in the business, you may require 5,000 beetles or more in a colony.

What kind and size of container do I need?
Aquariums or good-quality, heavy-duty plastic totes are the most common containers used (they can’t be chewed through) to house a beetle colony. A 100-gallon aquarium is a common size for a colony of 1,000 beetles. The edge seams on aquariums should be coated in vaseline to prevent bugs from crawling up along the exposed bead of silicone sealant, a foothold for beetles to climb up and out of the container. Ultimately, The size of the container depends on the size of the skull you intend to clean. Excess space is less efficient for cleaning. A 28-gallon tote is ideal for cleaning a deer skull with a rack. The beetles can be put to work cleaning any size and type of skull as long as the container is big enough to hold the entire structure and keep the colony confined around the skull. Between specimen cleanings, you’ll need to do a little housekeeping—removing dead beetles and frass (the powdered wood produced from insects burrowing) from the container and adding bits of fresh meat to feed the colony until the next cleaning cycle begins.

Do the beetles need ventilation?
Maintain good circulation to provide airflow and a barrier to keep predators out and keep beetles in. A secure, screened top over the container will keep pests out and the beetles in while providing adequate ventilation for the colony.

Do they need material or nesting?
Shredded paper, wood shavings (but not cedar), or similar materials can be used to cover the bottom of the container to provide habitat for the beetles. Chunks of styrofoam can be added to serve as a medium for beetles to burrow into and lay their eggs. The byproduct of that burrowing is frass, which will add to the layers forming the bottom of the container. Clean and replace periodically as needed.

Do the beetles need water?
A sheet of moist paper towel laid out is all that is usually needed to keep the beetles hydrated. Hydrogel (water-retention crystals) can also be used to maintain adequate moisture in the container.

What about food before I put them to work?
Any animal protein can be fed to the colony—from hotdogs to chunks of rough fish. They won’t eat skin, fur, hide, feathers, scales, etc.

Tom Watson lives in western Minnesota where he is an award-winning writer and photographer specializing in a variety of outdoor-related fields, including kayaking, self-reliance, and more. See more of his work at tomoutdoors.com.