If antler size – and the almighty score – are a priority, then we really don't want to make a mistake when we decide to hit the switch. If a buck has it all – mass, width, height, lots of points, and it’s a mature deer – it’s time to lock in your sights and make the shot count. Photo Credit: Trace G., Lil’ Toledo Lodge

As hunters, we wait all year for another chance to fill our deer tag. Some of us are privileged to take multiple bucks in a season, but many of us have just one kick at the can. If antler size – and the almighty score – are a priority, then we really don’t want to make a mistake when we decide to hit the switch. Venison is great, but when you have only one antlered deer tag in your pocket, the last thing you want is to approach your deer and find his headgear is smaller than you thought.

Here are a few tips for evaluating your next buck to avoid ground shrink. This mule deer has it all: Mass, width, height, deep forks, and even a few sticker points (trash) make it a high-scoring trophy buck. Photo Credit: Kevin Wilson

Genetics are everything in the world of a whitetail or mule deer. Strong genes produce heavy-racked bucks. You and I may have slightly different ideas about what constitutes a true trophy, but when it comes to high-scoring bucks surpassing Pope & Young or Boone and Crockett minimums, mass adds up the numbers in a hurry. The more mass, the better the antlers will score. Indeed, mass is the first thing I notice.

When we talk about mass, we’re referring to the thickness, or girth, of the bases and how it carries that weight all the way through the main beams and points. For comparison, main beam circumference measurements between 3 and 4 inches are common in areas that are well-managed i.e., with healthy age-class structures and decent genetic strength. When they measure 5 inches or greater, you’re looking at some serious mass. If main beam lengths exceed 25 inches and – even better – if they carry that weight consistently, you’re probably looking at a heavy hitter.

Furthermore, the more points the antlers have, the higher the gross score. In the U.S. it’s common to reference the total number of points when describing a whitetail buck, i.e. a 10-point, 8-point, and so on. In Canada hunters reference the number of points on each side, i.e., a 5x5, 4x4, or other. Rare are the record book contenders that have less than five points on each side. Most racks need the extra tines to add up the score. The exception: when bucks have both incredible mass and tine length. The more scoreable inches on each point, the quicker the numbers add up. With non-typical bucks, extra points often extend from main beams, eye guards, drop-tines, and so on to increase the inches. As a general rule, the wider the antlers, the better. Look for beams that extend outside the buck’s ears. Photo Credit: Kevin Wilson

As far as field judging trophy quality goes, the wider the antlers, the better. Every buck is different. Some have main beams curving inward in a typical manner; others flare out. But don’t be fooled by this. Take time to evaluate trophy potential, and notice whether the main beams just go out or if they go out and then curl back inward.

Most “cookie-cutter” 120-class bucks have an inside spread somewhere between 13 and 17 inches. This is easily assessed on northern and midwestern whitetails by determining if the buck’s main beams remain inside or extend outside the ears. Beams that extend outside the buck’s ears, fully extended and perpendicular to the head, usually measure around 17 inches, give or take. I get real excited if a buck’s antlers span several inches outside his ears, and anything with an inside spread measuring 20 inches or greater really gets me going. With mule deer, trophy hunters generally look for bucks with at least a 22-inch spread. Cookie-cutter 160s generally fall in this category. Find one with a spread over 26 inches and you’re likely on to a buck well worth a closer look, but width is just part of the equation. Writer and professional guide Kevin Wilson took this buck during the first week of the 2017 archery season. Even though he’s a 4x4, his exceptional mass and split eye guard increase his score significantly. Photo Credit: Kevin Wilson

The taller the tines (or points), the better the score. Some bucks grow antlers with short and stubby tines; others grow them tall. Height (or long tine length) is another feature that increases the score. If any tines measure greater than 10 inches on a whitetail, you may be looking at a really big deer. But remember: height is just part of the trophy equation. Similarly, double eye guards increase gross inches, as well.

Tine length is critical with mule deer, as well, but deep forks where the tines branch in a ‘Y’ formation really rack up the points, so to speak. Anything over 7 inches is worth looking at, but the numbers rise when those forks measure over 10 inches. Non-typical points like drop-tines and stickers add character and inches to a buck’s gross score. However, some scoring systems count these irregularities as deductions. Photo Credit: Kevin Wilson

A whitetail’s antlers are said to be typical if they have a normal-looking mainframe with regular tines extending upward. The greater the symmetry between the left and right sides, the better it will score. Why? The Pope & Young Club and Boone and Crockett Club each have different categories for measuring and qualifying typical versus non-typical antlers. Depending on the method used, differences (irregularities) may be counted as deductions.

We’ve all heard the phrase “mass and trash.” Well, when it comes to non-typical bucks, if it’s heavy and has abnormal points, stickers, or drop-tines, that’s what we’re talking about! I know several hunters that look for typical mainframe bucks only. To each their own, but few things get this deer hunter more excited than a non-typical buck. This muley buck is certainly nice. He’s got OK mass, good tine length and forks, and he appears to likely be a 5 ½ year-old buck … but he’s not very wide. Shoot or pass? Photo Credit: Kevin Wilson

Aging bucks on the hoof is vital if you really want to manage the bucks in your area. Manage for genetic strength and age, and you’ll eventually grow big trophy-class bucks.

With both whitetails and mule deer, yearling to 2 ½ year-old bucks are noticeably slight in stature. While there are exceptions, they typically have either spikes or forks and often hang with their family group right through the fall and into winter. By 3 ½ years, bucks begin to fill out. Their antlers may be high and wide, but they are often still spindly. Given the right genetics and conditions, some of these might appear to be trophy class bucks, but make no mistake: They haven’t reached their full potential yet.

Bucks are considered mature when they reach 4 ½ and 5 ½ years. They’re robust in shape, often begin to get a sway-belly, have wide shoulders and a burly face, and their antlers show considerable mass and configuration. Any bucks surviving to 6 ½ years and beyond may still have antlers with good mass but the configuration tends to fail, often moving them gradually out of the elite trophy circle. Body-wise, they can still thrive as long as protein-rich food is abundant and the winters mild. Just remember: Predators and the elements claim them one by one as the years pass, which means relatively few bucks make it past 5 years of age. Mass, width, height and age are all important factors in scoring a trophy buck. When judging on the hoof, wait for the buck to present a side view so you can make an accurate assessment. Photo Credit: Kevin Wilson

As a professional outfitter, I always tell my clients that if a deer looks decent, it’s worth a second look. But if at first glance you’re blown away by its size and stature, it’s a shooter. My recommendation: If you immediately think it’s a monster, it probably is. If you have to think about it too much, it’s probably a nice deer but it may not be a great deer. If there’s no ‘wow’ factor at all, then passing could be a good move – especially if you’re looking for a wall hanger. On the other hand, if a buck has it all – mass, width, height, lots of points, and it’s a mature deer – it’s time to lock in your sights and make the shot count. 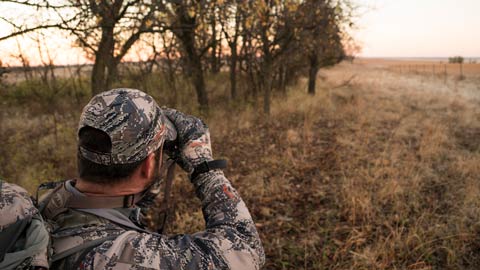 Guide Logic: Guiding Hunters with a Fear of Bears
All Articles