The Serenity of Suffering

Finding peace in the torments of nature. 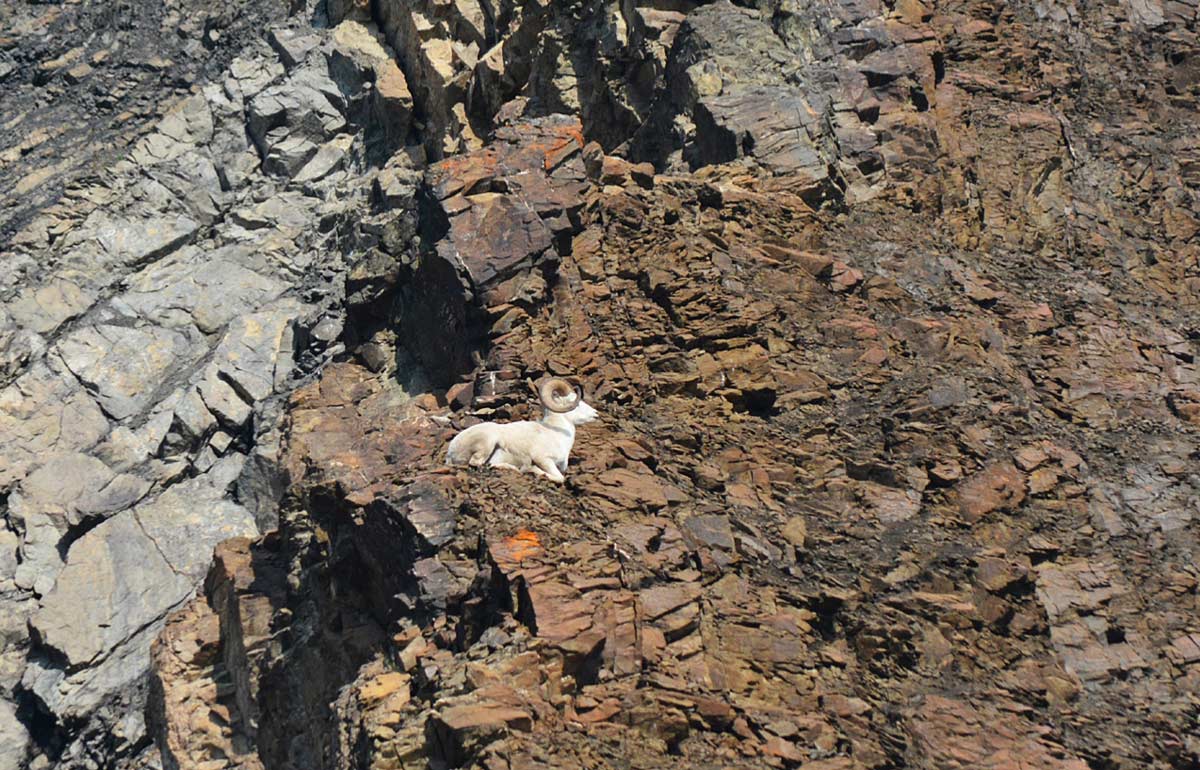 On a mid-August day, my hunter and I ventured deep into never-ending mountain valleys where we planned to hunt Dall sheep. The range was a labyrinth of boxed-in corridors and serpentine-shaped canyons—the sort that creates plenty of habitat for Dall sheep to feed and escape carnivorous aggressors, animal and human alike. After two days of hiking many miles down into one of the valleys, we discovered an old, abandoned, tin-sided shack that we decided to use as a base camp.

The following morning, we quickly found a legal ram. In Alaska, three methods of identification are used to determine a sheep’s legality. The foremost technique is viewing the ram’s horns from the side, (preferably parallel) to see whether or not the horn creates a “perfect circle” in which the circumference reaches a total of 360 degrees. Second is the “double broom” assessment. Rams break off or “broom” their horns during battles with other rams, and if both sides are broomed, the ram is legal. Third is the age-ring test, which requires a side view of the ram to determine if it has eight or more visible rings that spiral along from the horn’s base to the tip. These rings are called annuli. The age-ring method is not very reliable because hunters and guides commonly misjudge the spirals and view “false annuli,” which makes the hunter think the ram is older than it is. A sheep must be at least eight years of age at the time of harvest, but some are harvested legally at age seven as long as they meet the above criteria.

We found the ram before its early-morning feeding cycle ended and before it left the lesser peaks for a perch on much-higher slopes. After utilizing a patch of nomadic fog that obstructed the ram’s ability to see us, we cut the distance between it and us significantly. The hunter made a clean kill at 164 yards.

And after skinning and butchering the ram, I packed the meat as well as both my and the hunter’s gear into my backpack. The hunter was so weak at this point he could barely walk. We then began the foreboding descent down loose shale rock. We had to traverse these steppes for 1,600 feet or so. My hunter vomited several times on the way back to the shack as he was thoroughly exhausted from the previous two days of hunting venture.

At the shack, I was relieved to remove the pack, which weighed about 200 pounds, and anticipated some good rest. An ermine, though, ran amongst the floor of our barely erect tin can of a shelter and kept interrupting our sleep. The next morning, groggy and weak, we set out for the lake to meet the Super Cub that would pick up my hunter and his gear. The pilot was also bringing a packer who would assist me in getting the sheep back to the lake.

Trouble Begins
I was glad for the help, but the packer had never been in the high country. The hike from the lake to the shack was tough on him, but after we divided up the ram equally and began the long walk back to the lake, he quickly realized exactly how excruciating this work can be and how the elements can make it even tougher.

We had just set out, and rain began to fall heavily, the winds increased to about 35 miles per hour, and the temperature dropped considerably. By this time I was exhausted and so was the packer, who had finished a grizzly hunt just the day before. Neither of us had consumed calories sufficient enough for this work, and the two of us also suffered from dehydration.

Adding to our woes, the valley floor began to flood. We walked the flooding river bottom through dense alder and willow brush, which was tough going, but our only other option was to move to the higher elevation, just above the loose shale rock, and walk the sheep trails that are strewn across the convex faces of the mountains. The trails, however, are very difficult to traverse and made nearly impassable by crevasses that even the boldest rams scarcely can leap. At the higher elevations, we would also find ourselves on gray rock faces scattered with black boulders that at any moment could be displaced with even the slightest touch sending the colossal natural monolith tumbling down the mountain, taking with it us and thousands of pounds of dirt and rock. We continued to take the slow and deliberate route of the river bottom.

The author’s lakeshore base camp in the wilds of Alaska—as it looks on a sunny day.

Fog Rolling In
As we carried on and the weather grew more foreboding, I looked to the surrounding summits and what I saw almost panicked me. The mountains began to regurgitate dense mist from every visible crack and crevice.

This frightened me because just one year before, on my friend’s birthday, he and I spent an entire night lost in dense fog, wading around the swamps that made up the outside diameter of our camp. We were soaked to the core and even though we had a GPS unit that continually notified us that we were “arriving in camp,” we never found it. The problem was that camp had “disappeared” into the gargantuan swell of dense fog. We waited through that night, sitting on a small rise in knee-deep water.

The next morning, when the sun’s rays diluted the mist’s vapors, we could see a boot track from the night before where we had walked a mere 10 feet from the guideline of my tent.

I told the packer I was not going to go through such a thing twice, as there is no guarantee that we would survive the night to tell the tale. Then I told him the bad news. We had to increase our hustle to get to our destination before sunset when the fog would blanket the world.

We pushed ourselves relentlessly for another two miles when I noticed my packer was speaking to me. I looked over at him and saw him in triplicate. He was entering a deep stage of stress and occasionally talking to himself—I was educated enough to know that we were in the beginning stages of hypothermia and extreme fatigue.

The packer asked if we could rest. I told him we could not as we were running out of daylight and our bodies were shutting down. Our core temperatures were plummeting because of the lack of nourishment, hydration, dry clothing, and the weather.

When we hit the swamps, I knew where we were—our lakeshore basecamp sat just one mile or so distant. After going around a knoll, I could see the canopies of our tents in the distance. We had one more creek to cross before crossing to trudge across the vast muskeg that was between us and safety.

We waded the creek, but on the far bank, I had a great deal of trouble lifting my leg the two feet needed to step up on the bank. The glycogen in my muscles had been depleted and replaced with lactic acid. This made the march across the muskeg that much more difficult—an inability to move made worse by every step sinking into the mud somewhere between our knees and groins. Stopping or resting would have meant certain death from exposure.

So we kept fighting, and after finding the strength within our very souls, we made it back to the tents 15 minutes prior to sundown and just before the fog would have dropped the visibility to next to nothing.

Even at camp, I struggled to open the two-stage zipper of my tent because my fine-motor skills had disappeared. I had to use my teeth to open both the rain fly and main tent compartment. Once inside our tents, we both immediately drank a lot of water and consumed energy bars.
I don’t know what the packer did at that point, but I stripped naked of my wet clothes and crawled into my sleeping bag to restore my body’s thermal temperature. We both slept for 12 hours.

In the morning, I crawled out of my tent and gazed at the surrounding mountains to find the mountain steeples covered with the first snow of the season. Within two hours I could hear the signature buzz of a Super Cub approaching the valley.

I sent the packer out first, and as I tore down our campsite, I reflected on why any person of stable mind would choose to venture deep into the heart of an Alaskan mountain wilderness in search of such an elusive creature as a Dall sheep. The hardships of the wilderness are well known before taking the first steps of the hunt, and they will have to be endured every single moment of the hunt.

I finally have come to one conclusion. You cannot cheat the mountain. Not only must you possess the fortitude to bear and overcome all the hardships of the high-country chase, but also you must enjoy the daily grind this kind of hunting demands.

As long as sheep dwell on the rooftop of Alaska and as long as I am able, I will pursue them. I and a few other hunters similar to me have found peace among nature’s torment. I call this the serenity of suffering.

Tyler Kuhn specializes in hunting the wilderness of Alaska.