The month of May has just passed the midway point. Most turkey seasons are winding down and the vegetation is lush and thick, making shed hunting next to impossible, at least from the Midwest to the East Coast. There is one season that’s just about as good as it gets at this point—Spring Black Bear. Wyoming, Montana and Idaho have bear seasons that start between April 15 and May 1. I have seen some good bear hunting the first week of the season (April 15) in Montana, but it is definitely the exception, not the rule. I don’t think gambling on that week is worth it. I have only seen opening week pay off twice in 20 years.

The first week of May seems to be the wake-up period for a lot of bears in the 6,000 to 7,500 feet elevation range. Weather is key. Late season snowstorms can keep bears in hibernation for a week or two longer than normal. A great thing about early season bears is their consistent feeding pattern. The first week or so, bears are lazily feeding around their den sites, trying to get their digestive tracts in working order before they start consuming meat. Find a bear there one evening and there’s a good chance you can kill it there the next.

Several years ago on an early season hunt my client Pete and I covered more than 15 miles in the first two days of his hunt trying to locate bear sign. We followed several bear trails we found crossing a rocky slope. Fresh scat littered the north side of the two-mile ridge. We didn’t see a bear on a particular evening, but the next afternoon we were back glassing the north slope. Around 4:30 I noticed a dark spot emerge from the timber only to disappear when the sun ducked behind the clouds. More glassing turned up nothing. I wasn’t convinced the dark spot was a bear so we moved on. No more bears or sign were found so we returned to the original glassing spot. Within minutes, the dark spot reappeared and this time it was walking! Hustling up the draw and trying to beat darkness, we looked up toward a giant snow drift. There stood a blonde cinnamon colored bear. Pete made good with his 300 Weatherby. The bear turned out to be a 17-year-old sow whose teeth were worn down to the gums. She was a great bear. Over the 15 years since that hunt, I have seen more bears on that one ridge than in any other two spots combined.

If there were ever a perfect storm for bear hunting, that north slope in Montana is it. Why? For starters, the two-mile long ridge runs into a think, nasty bowl of timber. It receives lots of snow and bears tend to hibernate there year after year. Once they come out of the den, they head for the ridge with its rocky slopes. The giant snow drift that lies just below the top of the ridge melts slowly through the month of May into June. The constant supply of water keeps tender young grass growing for those couple months, making a wonderful salad bar for hungry bears.

The snow that drifts down into the valley also keeps the forest service road closed for much of the spring, which means the bears have peace and quiet. Cover, food and seclusion—it’s all there. As the season gets into the end of May, bears are really on the move. All bears are looking for fresh protein. That may come from winter kills, cows that died while calving or elk calves and fawns. Glassing up cow elk in their calving grounds could produce a bear. If you find a bear using this method, keep in mind the location of the elk while planning your stalk. Spook them and your bear will slink back into the timber.

Boars are in search of sows this time of year as the mating season gets going. Since many areas are now lush and green, deciphering where to concentrate your efforts gets a little harder. I like good vantage points where I can cover lots of country with my Zeiss optics. Keep glassing. You never know when a bear will show up. Generally speaking, afternoons are better than mornings and warm, sunny days beat out overcast, dreary days. When you spot a bear this time of year, especially a boar searching for sows, you have to make your move and make it fast. Bears are not stationary for very long. Having a buddy along to keep an eye on the bear while you make your move is a great idea. Have a set of hand signals made up so he can help guide you in as you make your approach. Radio communication is a no-no in many states while pursuing game so make sure to check the regs before using radios.

Springtime spot and stalk bear hunting provides more than just a bear hunt. Hiking or driving new country allows you to scout new ground for elk and deer season. Learning country in the spring saves valuable time in the fall, and you just might run into a bear in the process. Trying out or breaking in new gear during the spring gives you a couple months to decide if it’s the right piece for you before the rigors of a fall hunting season arrive. The weather is usually pretty nice. I did say “usually.” Anytime you are above 6,500 feet in May, be prepared for snow. It can be 80 degrees one day and blizzard conditions the next. Make sure you are prepared for it.

If you are reading this and wishing it were September instead of May, give bear hunting a try. Parts of Montana and Wyoming offer hunts until the 15th of June. Some units in Idaho run until the end of July and others open up in August. Idaho and Wyoming also allow baiting. If a baited hunt is the route you want to take and you don’t live in the area, a guided hunt is your best option. Baits take time to establish and may require a permit on public land. Always be mindful of each state’s rules and regulations. 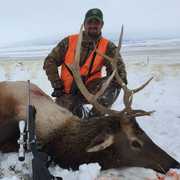