Deer Rut Timeline: The 7 Stages and How to Hunt Them 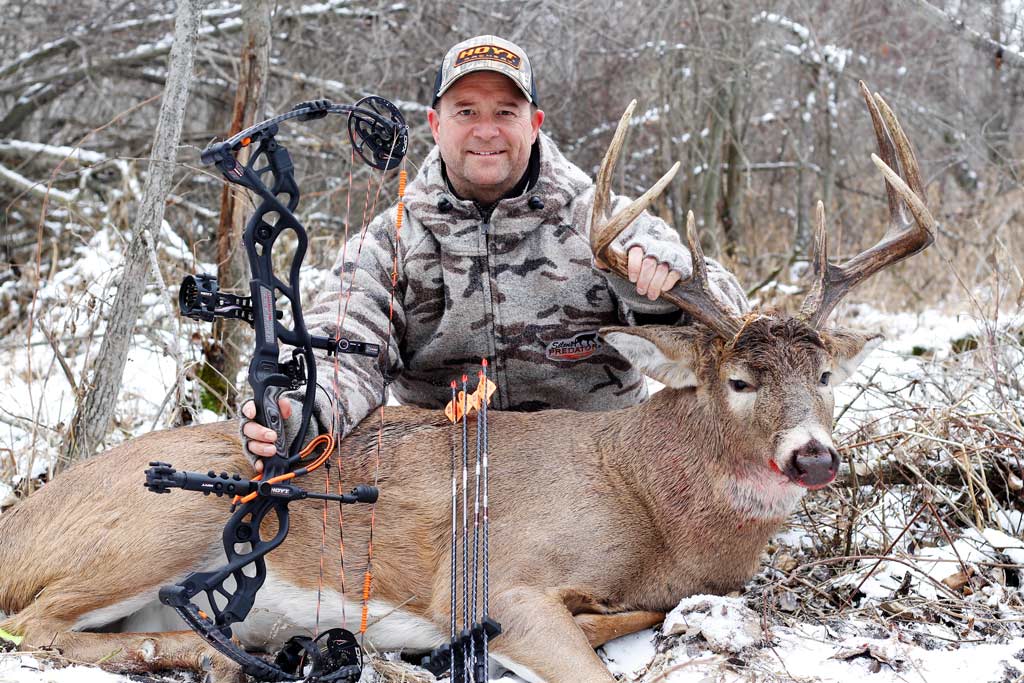 Volumes have been written about the whitetail deer rut. In an effort to simplify a rather complex subject, it can be broken down into seven basic stages. Understand what motivates deer during each of these, and your chances of closing a tag go way up! Photo Credit: Kevin Wilson

Celebrated and studied ad infinitum, the whitetail deer’s annual cycle is constantly under appraisal. While we traditionally think of the rut as a November phenomenon – or later with some southern subspecies – the earliest stage actually begins as soon as bucks lose their velvet. Throughout the next four months deer advance through seven clearly identifiable phases. Adapt your hunt strategies for each, and success will follow.

Stage 1: Transition from Velvet to Hard Antler, Start of the Pre-Rut

The shedding of antlers and impending regrowth is an annual occurrence. Velvet antlers are highly vascular and grow rapidly to reach full potential by the end of August, which aligns with the earliest hunting seasons. Lasting less than a week, this change from velvet to hard antler marks the true beginning and earliest stage of the prolonged pre-rut. As soon as the velvet disappears, bucks begin making boundary scrapes and rubs throughout their home range. Even though the transition itself is brief, this pre-rut behavior continues through September and October until bucks step up their search for receptive does.

In agricultural areas, the year’s first scrapes begin to show up along field edges and tree lines. Likewise, a few rubs will be evident in similar areas. These are more territorial markers, but as things heat up from mid-October on, rubs and scrapes become focal communication tools. 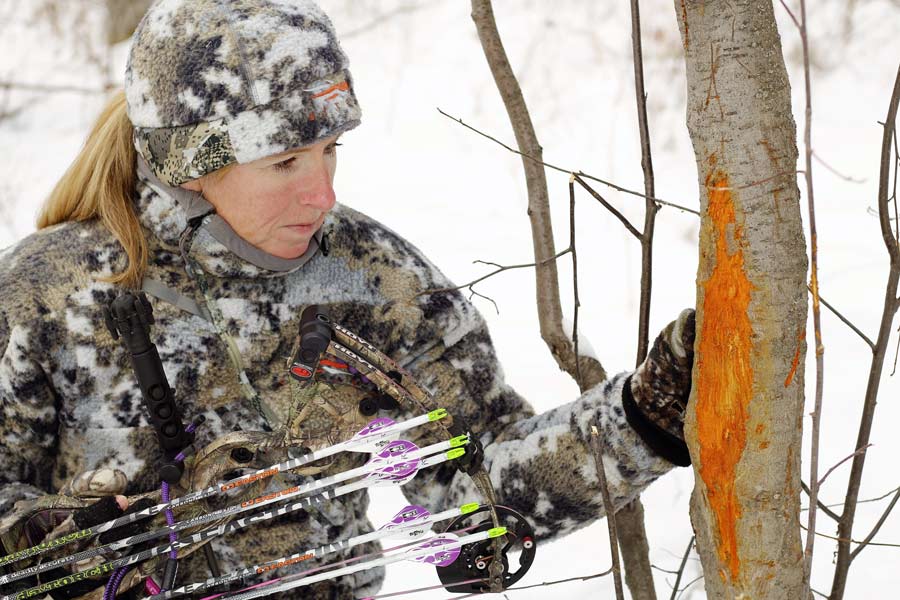 Stage 2: Seeking Phase of the Pre-Rut

By more contemporary description, the pre-rut heats up and younger bucks in particular start to move more near the end of October as both bucks and does visit and urinate in scrapes. Scrapes are almost always made under some type of overhanging branches. These are referred to as licking branches because bucks lick and rub their orbital glands on them to deposit scent. Urine and glandular secretions contain pheromones that indicate breeding readiness. Other deer visiting these sites detect the hormonally charged scents to identify which deer was there, and whether they were bucks or does.

The seeking phase is best described as the general two- to three-week period just before the majority of does go into estrus. Ask most hunters to define this phase, and they’ll probably say it’s the time when young bucks become eager to breed and begin moving more during daylight hours in search of receptive does. What many hunters don’t know is the pre-rut is actually a much longer, drawn-out occurrence – a time when bucks begin to move throughout their home range, mark territory, and inventory does.

By late October, the photo phase’s shorter days prompt bucks to prepare for breeding; they know that does will soon be receptive. This broadly defined seeking phase occurs approximately between Oct. 24 and Nov. 9. Survival of each species depends on the rut cycles, and it’s as guaranteed as the rising and setting of the sun. For bow hunters or in jurisdictions where gun hunting seasons allow, this is a great time to be in the deer woods. During the seeking phase, bucks eagerly respond to doe bleats, buck grunts, and rattling. The best strategy a stand or blind hunter can employ during this phase is setting up along a heavily used scrape line, or in a known funnel or transition zone.

If you believe in moon phase influences on deer behavior, the late Charles Alsheimer is perhaps the best-known authority. According to Alsheimer, the seeking phase peaks three to four days before and after the rutting moon, which he defines as “the second full moon after the autumnal equinox.” Through his research, he has identified that bucks will make as many as six to 12 scrapes per hour at the height of the seeking phase. In other words, bucks are on the move and your chances of encountering the highly secretive whitetail during this phase increase exponentially.

Given Alsheimer’s scientific explanations, the timing of the seeking phase and advancement into the chasing phase of the rut can vary by a few days. In general terms the seeking phase begins as early as the third or fourth week in October and transitions sometime around the second week in November. In slight contrast, my own research over the last 30 years suggests that moon phase plays a less significant role and that undisturbed does in any given area will, without exception, go into heat within a consistent 24- to 72-hour timeframe each and every year. Much like people, their estrus cycle can, of course, be manipulated slightly by imposing manmade influences like hunting pressure. 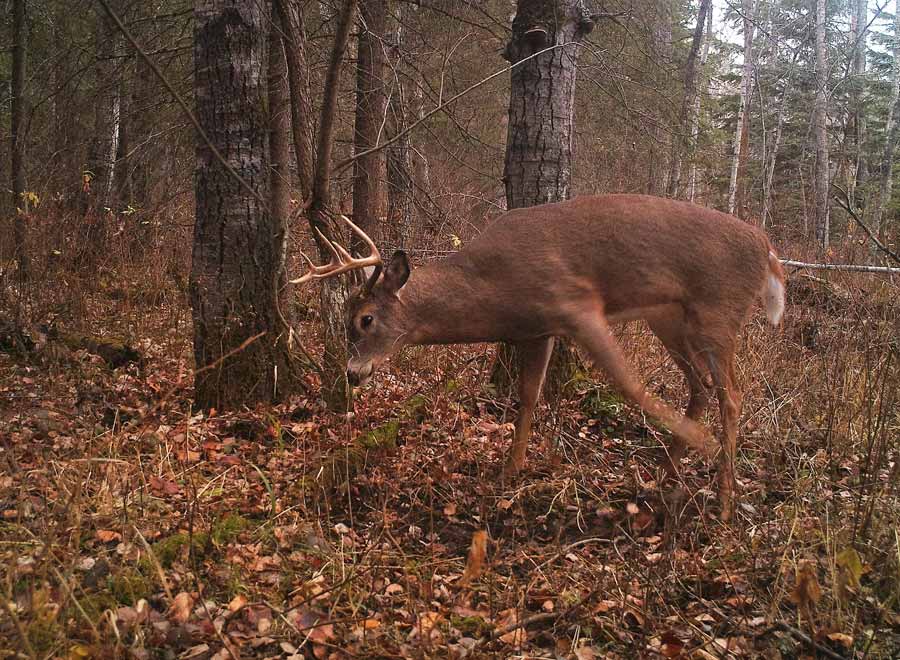 According to famed whitetail authority Charles Alsheimer, bucks will make as many as six to 12 scrapes per hour at the height of the seeking phase. Photo Credit: Kevin Wilson

Sometimes difficult to differentiate, this pre-breeding period occurs immediately after the seeking phase and just prior to actual breeding. In layman’s terms, it’s when does are almost in estrus and bucks know it. During the chasing phase, bucks feverishly scour the woods, pursue and, quite literally, chase does around checking them for breeding readiness. Their purpose is to find and service a hot doe. Being in the woods at this time is magical. During the seeking and chasing phase and where healthy buck-to-doe ratios exist, rattling, grunting, and using doe bleat calls can be extremely effective in attracting curious, testosterone-driven bucks into close range. One of your best strategies involves locating and setting up over a primary scrape. These primary scrapes are often double or even triple the size of boundary scrapes and are visited regularly – usually daily – by both bucks and does in the area. Focus your efforts on a primary scrape from about Oct. 25 on, and your chances of encountering deer go way up.

In very general terms, the chasing phase typically occurs throughout the midwestern, central and eastern U.S, and across Canada through the second week in November. I usually anticipate the chasing phase to occur between Nov. 11 and 14. Bucks and does use scrapes as a primary communication tool and continue servicing them with increased frequency during this time. At this point, a select number of primary scrapes will be visited most frequently. Locate one of these primary scrapes and you'll greatly increase your odds of an encounter. 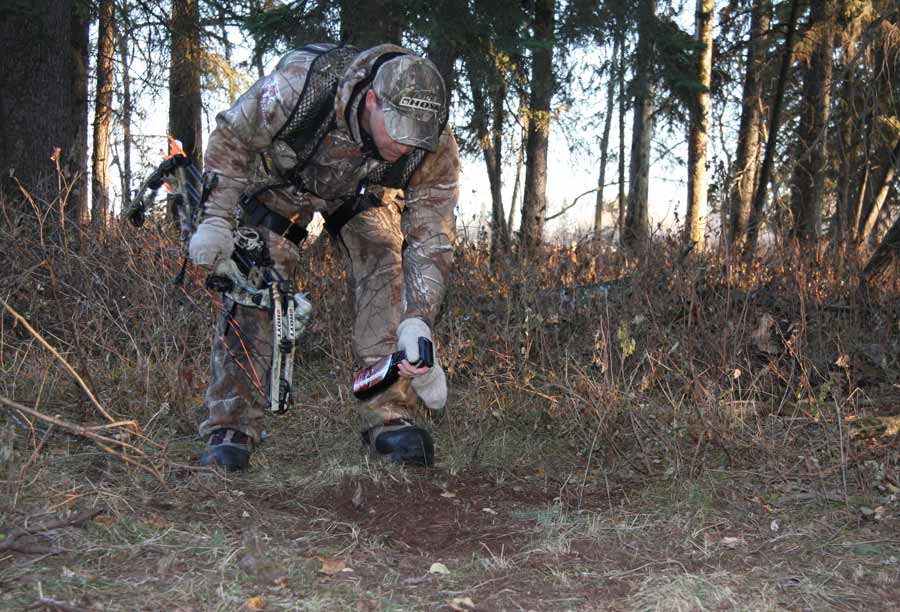 The breeding phase, or estrus period, is viewed as the peak of the rut. This is when buck movement breaks wide open. It’s when does go into estrus and are receptive to the breeding advances of eager bucks. Throughout western Canada, this peak whitetail estrus intensifies between Nov. 11 and 16. I know, for instance, that in many of the areas I hunt, this is invariably between Nov. 12 and 14.

The biggest challenge for hunters during the breeding phase is that when a buck locates a hot doe, he will usually stay close until that doe is bred. In fact, mature bucks especially will quite literally lock them down. In other words, they’ll shadow the hot doe and hold them in a secluded location. As breeding commences, with each day the lockdown phase becomes more pronounced. During this three- to five-day stretch it appears that bucks have all but vanished, and visible movement comes to an abrupt halt.

Every year, I witness this distinct period play out obviously between Nov. 17 and 23. The name of the game at this time is focusing on early-morning and late-evening transitional movement between bedding and feeding areas. Patience is a virtue for the stand hunter as bucks without does will still be on the move looking for does that have not yet been bred. Likewise, this period can present one of the best times to take a mature trophy whitetail as big bucks drop their guard and make breeding and traveling in search of does in estrus their top priority. Throwing caution to the wind, their sole purpose is breeding. 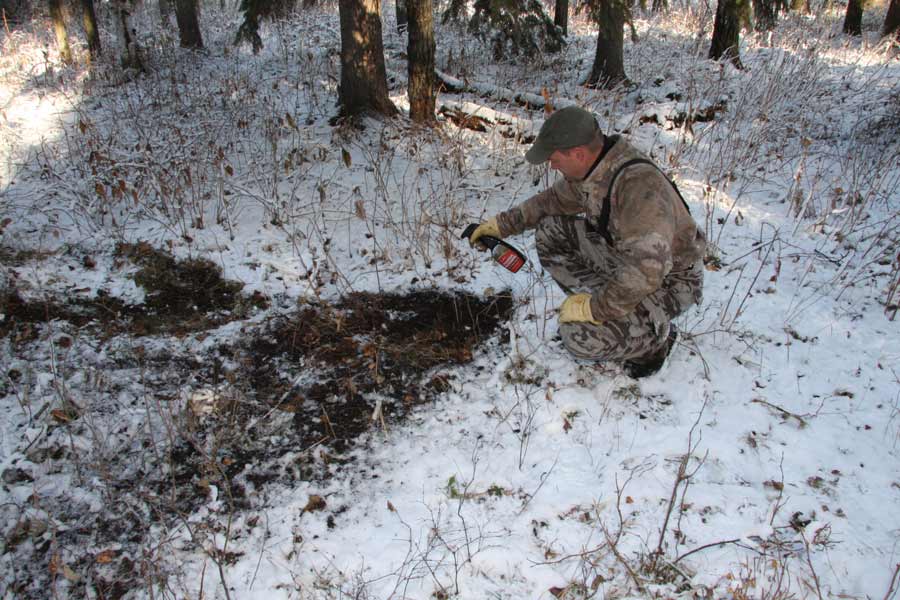 Rubs and scrapes become focal communication tools for whitetails from about mid-October on. Both bucks and does will visit scrapes with increased frequency leading up to and during the rut. Photo Credit: Kevin Wilson

If you don’t tag out by the end of the first round of breeding, don’t panic. A buck’s breeding instinct motivates him to continue his search for hot does throughout November and even into the early part of December. Approximately fourteen days after the first estrus, does that didn’t get bred will go into estrus a second time. I’ve witnessed this during many deer seasons, and it’s very obvious as long as you’re on top of the deer. The primary difference is that visible buck movement decreases as they localize travel to within proximity of the does that still need to be bred. Where I hunted last fall, the second whitetail estrus was most notable between Nov. 25 and 30. The second estrus can be a tricky time to hunt but if you move in tight to where does are feeding and bedding, you’ll no doubt increase your odds of getting a shot opportunity.

Then, finally, the post-estrus stage brings an abrupt end to it all. With breeding accomplished, does almost seem to go into hiding. Bucks can be seen meandering here and there trying to locate any late does, but overall breeding is wrapped up, and within days both bucks and does transition into their winter survival patterns. The weather turns colder, there’s typically snow on the ground, and deer readily shift back into their bedding and feeding patterns, traveling only short distances to minimize energy expenditure. Where seasons allow, the best strategies for hunting the post-rut involve locating the best food source near prime thermal bedding cover. Hunt the food source and success will follow. 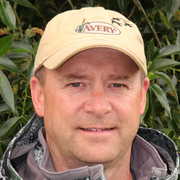