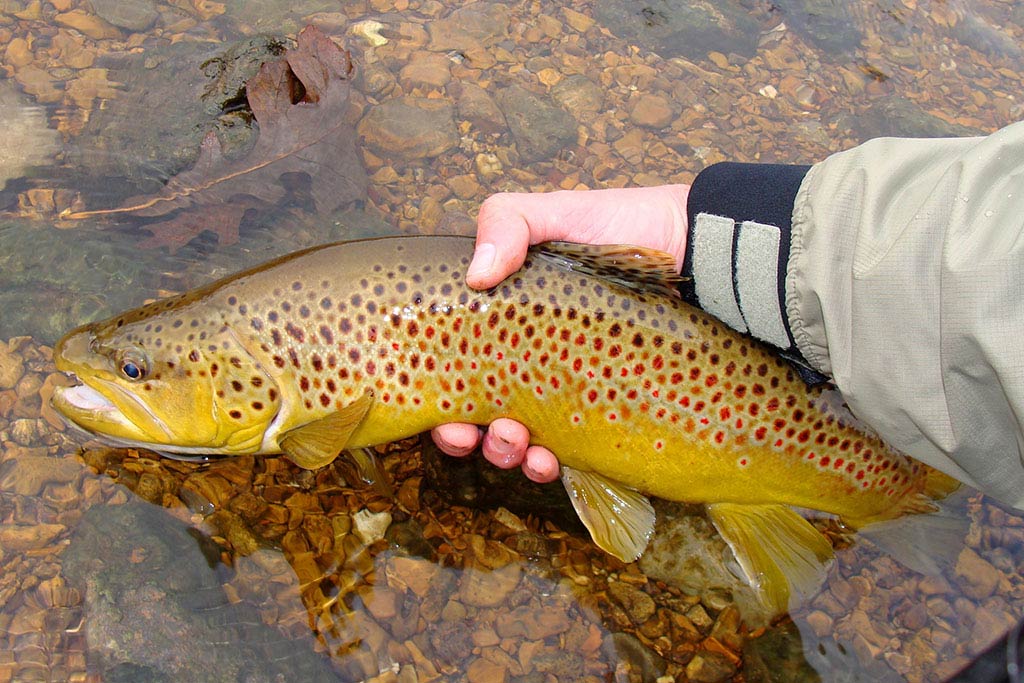 I love a good spring blue-winged olive hatch, and few sights are as impressive as a good yellow sally hatch at the end of June. But there’s something about fall fly fishing that gets my blood boiling in the best way possible. Maybe it’s the subtle bite of chilly air or the emptiness of rivers as fair-weather anglers retreat to warmer hobbies, but I’d choose fall fly fishing over any other season ten times out of ten.

The real reason I love it so much, though, is the brown trout. Here in Utah the biggest fish in almost every river are browns.

You can head to rivers famous for their giant brown trout – the Green below Flaming Gorge Reservoir in Utah, the Yampa, Colorado, and the Madison – but you’ll be fighting for elbow room with other anglers.

Instead, you can stay home and find the big browns in your local stream. A catch like that is more impressive, especially if your local stream sees moderate pressure and few, if any, “big” catches.

Even if you don’t think a hawg is lurking in the stream you like to fish close to home, I’m here to tell you that every bit of water has a giant fish lurking somewhere.

So how do you find the big trout that are in your local stream? It’s actually not that hard.

The first key to locating any kind of big trout, but browns in particular, is looking for structure. Walk the river and look for:

Once fish reach a certain size – and that size differs from fish to fish and species to species – they really only eat other fish. I don’t know if trout ever become truly piscivorous because I’ve seen some absolute giants hauled in on everything from midges to grasshoppers, but that’s not the point.

What’s key to understand here is that really big fish know they own the river, so they get the best feeding lies. They’ll set up shop in the fishiest-looking water and won’t move a whole lot.

Cut banks are great because it lets fish hang out in slow, calm water without exposing themselves to predators from above (like bald eagles). The same goes for root balls and fallen logs. They create a buffer in the river where the current slows, fish can easily find cover, and most importantly, food is funneled directly to these spots.

Eddies, pools, and seams are a bit different. In eddies and pools, fish are more active, chasing prey and snacking on anything that crosses their path. Out on my favorite piece of the Green River here in Utah, there’s one stretch referred to as “The Aquarium.” Gin-clear water lets you watch fish chase your streamers or smash dries, and it’s interesting to watch how the really big fish move in that type of water. They won’t always jump at quick offerings – they didn’t get big by being stupid, after all – but when they do they’re not afraid to take off and really charge at a meal.

Seams are great because they’re like a feeding tube for trout. Any big fish sitting on a seam gets the benefits of slower water on one side with the rapid pace of the quick current on the other. Slow water gives trout the opportunities described above in pools and eddies, while the quicker water washes down stunned baitfish, injured small trout, and bigger insects like stoneflies.

Generally yes, and usually more so in the fall, but you don’t need a 4/0 Sex Dungeon on 1x leader unless your local river is the Salmon.

I like to fish streamers that are bigger than my normal summer fare, but I rarely top a size 4 articulated bugger when fishing rivers. There’s just not a lot of need for a fly bigger than that unless you’re after musky or pike.

Where you want to go big is in your rod and tippet. I don’t own a 6-weight, which is a bit of a shocker for a native Western trout fisherman. I use a 7-weight for my “big fish” days, but it’s all preference. If you’re throwing streamers all day, though, you want either an outrageously stiff 5-weight, or a 6 at the very least.

And get any and all tippet under 4x out of your vest or sling pack. In fact, this time of year I fish streamers on a level strand of 10lb Berkely Vanish fluorocarbon. Fluoro is a must for two reasons: it’s almost invisible in the water, an important feature in the low clear flows of fall, and it’s more abrasion resistant than monofilament. If you hook a big brown anywhere near a log, root ball, or cut bank, you’ll be thanking all the fishing gods that you used fluorocarbon instead of monofilament.

Lastly, you need to give it time. Big brown trout are as finicky as elk, I think. You’ll never see the true amount of how many giant browns there are – just like elk – but the moments when you do are worth the wait.

So, go to your local stream, find some good structure, rig up with the right tackle, and give it time. Be consistent and you’ll find those giant browns.